Joy Neal Kidney joins us today with her new book called Leora’s Letters. This story of love and loss during WWII features Joy’s mother, a young woman with dreams disrupted by huge loss. Yet she continued on to live a meaningful life–lessons for us as we face our own challenges.

Joy will give away one signed paperback copy of Leora’s Letters to a commenter. I’m finding treasures within–there’s nothing like letters straight out of the World War II era. Thank you, Joy!

It was the only formal gown my mother ever owned. She bought it for the opening of the officers’ club at the Marfa Army Air Base in Texas. Doris had just become an officer’s wife by marrying Warren Neal, an Iowa farmer who’d earned his pilot’s wings.

Doris Wilson had been a waitress in Perry, Iowa, at the McDonald Drug Store, which had a soda fountain and a restaurant area. In fact, she was serving Sunday dinner there when the announcement of the attack on Pearl Harbor interrupted the background music playing on WHO-Radio.

She remembered thinking that all her brothers were liable to be drafted. One by one the five Wilson brothers left to serve – two in the Navy, three in the Army Air Force.

Dale Wilson and Warren Neal, both Iowa farmers, had enlisted as air cadets in 1942. They were awarded their silver “wings” and became officers on the same day a year later – Dale at Roswell, New Mexico. Warren at Marfa, Texas.

Warren was retained at Marfa as an instructor for advanced cadets. With calls for women to enlist to help with “the cause,” Doris had begun the process to apply for the WAVES. Warren was afraid they’d get separated forever so he asked her to get married instead.

Doris, wearing an aqua suit, and Warren in uniform were married in May 1943 in Dexter, Iowa, then headed for Marfa, Texas.

They’d just gotten settled when they were to attend the formal opening of the new officers’ club. Doris’s first formal gown for the dance was nearly the color of the suit she’d been married in a few months earlier – aqua, short-sleeved, accented with lots of small ruffles.

She wrote home that she had fun at the dance and felt like Cinderella.

That fall, she wrote her brother Dale, then in combat in New Guinea, “I’m going to let you in on a secret. We haven’t told anyone yet, but we are going to have a boy (we hope) next May.” Dale never got her message. The V-Mail letter was returned, still sealed, marked “Missing in Action.”

Decades later, I – the boy she’d hoped for – was the first person to open the little V-Letter and read it.

There’s no photo of her wearing the aqua gown. I remember seeing it as a child only a couple of times among her keepsakes in the storeroom of our old farmhouse.

But now it’s been passed on tome, Doris’s firstborn, who eventually became the keeper of poignant family stories and letters and terrible telegrams.

Treasures, like the aqua gown, to wonder about. Did she ever get to wear it again?

February, the “love month”… Our guest this week developed a larger view of love over thirty years ago. Sonia Solomonson shares her experience here. Solomonson, a former religious magazine editor, is a freelance writer/editor and also a life coach who can be found at www.way2growcoaching.com. Perhaps you or someone you know can relate to her story:

I’m never allowed to forget. Every year, newscasters remember the day the Challenger blew up—32 years ago this past January 28. It also marks the day I was in divorce court.

As I think back to the years leading up to that day in court, I remember the mounting difficulties in my marriage. The first years seemed good, until things changed and I began to realize the high price I was paying for tamping down who I was created to be and letting my pastor husband control me and our life. It took me seven years to build up the courage to make a move, seven years of asking that we go to counseling and seven years of his saying “No.”

I knew no one who had gone through this, and my shame kept me from talking with family or friends. I prayed fervently for answers. I shed many tears through those years. Finally the fear of staying in the relationship was greater than the fear of leaping out on my own. In addition, I had looked into the future and seen myself as an unhappy, beaten-down and bitter old woman. I didn’t much like that picture. I still loved my husband; I just could not live like that anymore.

I’ll be honest: It was frightening, difficult and lonely at times. At times I felt like the cardinal in the photo below: I was skating on ice with no solid ground under me. My image was that of being afloat on a huge ocean with only an empty plastic milk jug to hold me up. It wasn’t until a few years later that I realized that jug was only a prop—and the ocean in which I was afloat was really God’s love holding me up! And I did come out on the other side of the pain—which is why the transformation of caterpillar to cocoon to butterfly is so meaningful to me today. 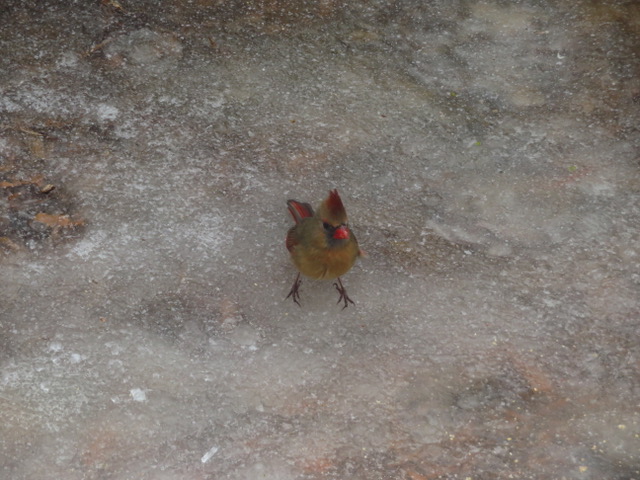 Now I realize things I didn’t know then. When I read Jeremiah 29:11, I see that God intends good for us all. God doesn’t want us to live in a harmful or diminished situation. “For surely I know the plans I have for you, says the Lord, plans for your welfare and not for harm, to give you a future with hope.” God has created each one of us for so much more than what we can imagine. And I wonder if it doesn’t hurt God’s heart when we let our God-given gifts be squelched and put down? When we don’t care for our bodies, our selves and our gifts.

Another verse from Scripture surfaced for me in the post-divorce years, and I realized I’d misunderstood it. In Mark 12:30-31we read, “‘…you shall love the Lord your God with all your heart, and with all your soul, and with all your mind, and with all your strength.’ The second is this, ‘You shall love your neighbor as yourself.’ There is no other commandment greater than these.” For years I heard and understood that we should first love God, then love our neighbor; and if there were any love left, love ourselves. But read this carefully: “You shall love your neighbor AS [you love] yourself.” So, if I don’t love myself well, I won’t be able to love my neighbor or “the other” in my life. It is God’s love that allows us to love ourselves and thus, love the others in our lives. And so I trust God every day to teach me how to love and care for myself—and then share that love with others.

I remember worrying at first that self-love was selfish. We women are so wired for relationship, so the biggest challenge for us is not as much selfishness as it is to learn self-love and self-care. That is not to say we women aren’t ever selfish, of course. But most women I meet have a tougher time loving themselves. And so I throw out this challenge to each of you: Live with Mark 12:30-31 and Jeremiah 29:11 and let them settle deeply in your heart. See what difference those verses might make in your life.

Have you ever felt you must walk on eggshells? Many of us can relate to Karen Stork’s story of learning to value herself. It is said that we teach people how to treat us. So I have always wondered how  I taught my husband to treat me with verbal abuse and control? And why would I continue to subject myself to this kind of behavior for so long?

Such questions were always in the back of my mind as I thought about the effects of being verbally abused. Helping young women avoid a similar path was another incentive for me, and the dream of becoming a published author was one that had festered for years.

Finally, on a beach in Florida in 2016, I decided it was time to get serious and turn my dream into reality. In one month, the story was outlined. Along with  chapters about my marriage, I also wanted to explore my childhood and my experiences and adventures as a single woman after marriage.

Returning home to Lincoln, I continued to write, but had no idea about publication or what would follow. I simply worked on writing and/or rewriting various chapters every day. After all, I needed a lot of experience writing in a very short time, since it hadn’t been a regular part of my daily routine since returning to college in the 1980s!

Early in 2017 I realized I couldn’t do this all on my own. I found a company in Omaha, NE to provide editing, book layout, cover, and assistance through the publication and marketing process. It wasn’t until late spring of 2017 that we had a title and format for the book — my literary baby was finally born on September 12, 2017. And the title was my inspiration!

Becoming an author fulfilled a major dream and helped me to understand some of my questions about th past. Other unanswered questions may never be resolved, but that’s okay. I don’t believe we can ever understand everything about our past; we just have to accept that whatever happened got us to where we are now. And this publication journey has been one of the greatest joys of my life.

Karen Heckman Stork calls herself “The Grandma Moses of writing” because it took her 53 years to achieve her dream of becoming a published author. She is a columnist for the Lincoln 55+ senior quarterly newspaper with a column entitled “A Lincoln Life.” She also co-wrote and produced a family book entitled “Between the Generations, Poems by a Nana and her Grandson.” Karen is a member of the Nebraska Writer’s Guild and is available to read from her book and speak on subjects including the harmful effects of verbal abuse, aging without growing old, life lessons learned and poetry.